Don't always believe what you read

Science is hard. That's why scientists are still around sciencing. In this article, we talk about one of the reasons psychology (and many other sciences) are flawed, and what YOU need to know to be more effective at applying it to your life.

Unfiled: this is an archived article from our predecessor website, The Dirt Psychology.

This is a short post, but an important one. You might have already seen something like this if you follow sites like I Fucking Love Science. A lot of people get confused by the simplest statistic - a correlation. This error can be pretty disastrous. Consider the latest business that's been running the rounds; the Autism/vaccination scare. 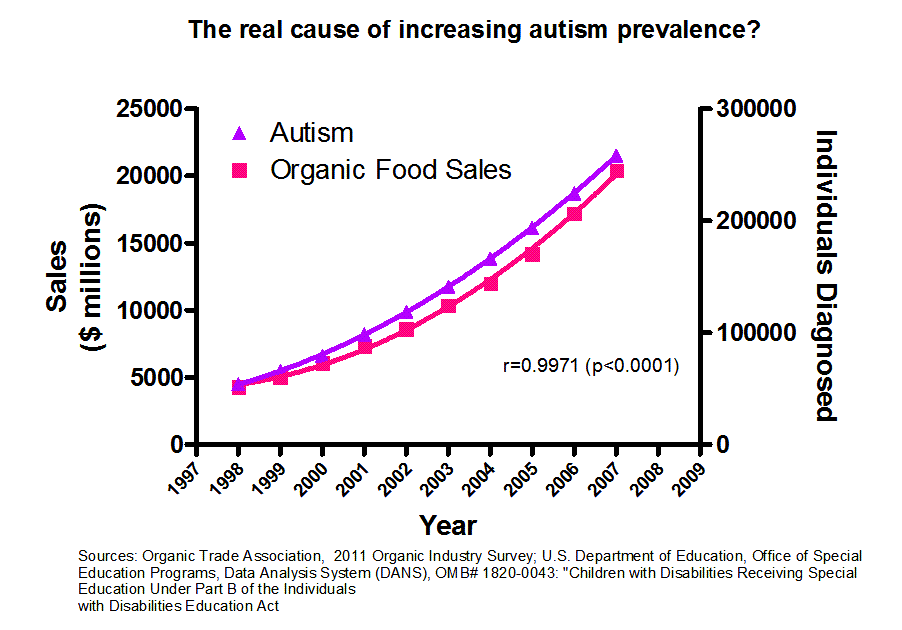 Somehow I doubt chemical free apples and pears are doing this, despite the fact that they correlate excellently on this graph. Either that, or our ancestors ALL had autism, and those without are the one who need a diagnosis.

Ostensibly sparked by Jenny McCarthy there's this correlation between Autism and vaccinations. Basically the statistics show that the rate of infant vaccinations were going up at a very similar rate to that of Autism diagnoses. As a result hundreds (maybe thousands) of people stopped vaccinating their children and we had a horrifying new statistic to deal with; rising infant illness and mortality. Now we have 'anti-vaxxers' stopping their kids getting vaccinations for all sorts of easily preventable diseases, resulting in 'epidemics' of things like mumps and whooping cough. Now, these 'epidemics' aren't really 'epidemics' (the media tend to overuse pretty serious and specific terminology), but they are getting pretty scary and in my opinion, exposing even one child to these things is probably something we want to avoid. The scientific community is extremely clear that Autism and vaccines are not related. There is clearly some other element causing the rise of Autism diagnoses. In most statistics courses, you'll come across this classic example. Now, some people tell it like this actually happened and others tell it like it didn't, so we'll call it an urban legend. Maybe one of you can do some research for me: Statisticians found that the drowning death rate rose in conjunction with ice cream sales, in one particular town. Ice cream was banned. Drowning deaths went down. Problem solved. Until next year, when the drowning death rate went up again. Turns out, the drowning rate was also correlated with summer. More people swimming meant more drowning deaths. This example is so common, it's on the Wikipedia page along with some others. Now those are all pretty boring, so why don't you check out this link to see some pretty hilarious correlations between Nic Cage movies and drowning deaths, or German cars sold with suicides by car, or deaths falling out of a wheelchair with total US Political Action Committees. 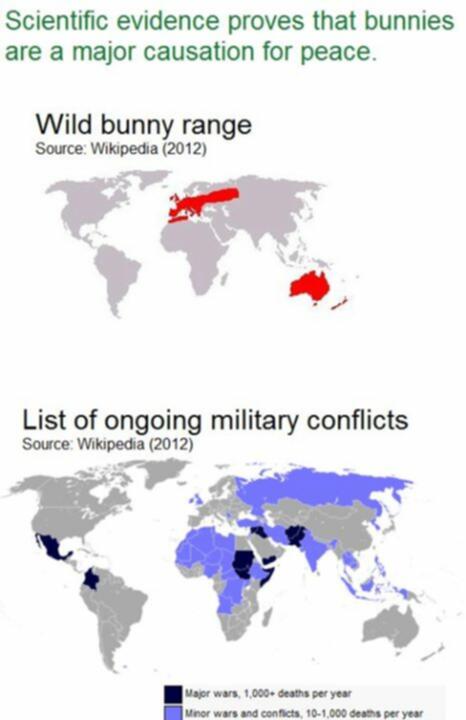 I always thought they were too cute to be a 'pest'. Courtesy of IFLS (Facebook)

Correlation DOES NOT always mean causation. Just because there is a relationship, doesn't necessarily mean they have anything to do with each other. Scientists who make this error get slammed by their peers. Nowadays anyway. To get published in a psych journal these days you're pretty much stuck doing huge studies, factoring in heaps of variables because realistically very little is correlated with only one thing. It's called 'moderation' and 'mediation'. Sometimes, some relationships are moderated by a third thing. Like the amount of food you eat at dinner and the size of your stomach would be moderated by how much food you ate for afternoon tea, see? Mediation is a little more complicated, it's where something has an effect on something else, and that something else has a resulting effect on a third thing. So the heat of summer (first thing) had an effect on the amount of swimmers (second thing) which had an effect on the amount of drowning deaths (third thing). Life isn't simple. You know that, or you wouldn't be here trying to make it less complicated. So, always be wary of making this error yourself. Make sure that you question these statistics that come your way because although the best case scenario is that you get it right and the connection is true, the worst case could be that children die needlessly. And I'm not just writing this because I'm getting on my soapbox about that. I'm writing it because on the site, I'll talk about statistics ALL THE TIME. You need to know that although I might point out connections, it's often much more complicated that I've made it seem. Unfortunately, I can't lay everything out in a 500-1000 word article for you. So I'll keep posting, and adding to your knowledge; clarifying these complex associations for you. All I ask is that you walk away thinking, 'well, that's great, I can use that, but that isn't the end of the story'. Keep reading. Do your own research, if you want. Ask questions. Ask ME questions, as some of you have started to do. Go that extra mile. You're here to better yourself, after all. Becoming more social can be pretty easy, as long as you do it right. Want to know about another kind of advice that's probably leading you astray every day? And speaking of fools, maybe you'd like to know why everyone thinks that YOU'RE a jerk (and how to fix it)? Giving you the dirt on your search for understanding, psychological freedom and 'the good life' at The Dirt Psychology.