The 'inkblot test' ain't worth your time | btrmt.

The 'inkblot test' ain't worth your time

Psychologists aren't allowed to tell you about certain things. Especially certain kinds of tests. Why? Well, it'll ruin them for you. They won't be 'valid' anymore and if you ever need or want...

Unfiled: this is an archived article from our predecessor website, The Dirt Psychology.

Psychologists aren't allowed to tell you about certain things. Especially certain kinds of tests. Why? Well, it'll ruin them for you. They won't be 'valid' anymore and if you ever need or want testing, they'll be rendered less valuable. However, there are some tests out there that are already useless so I won't be causing problems for anyone (except those mental health workers who need to pick up their game) if I tell you about them. Enter Hermann Rorschach. He invented the classic 'inkblot test' you've probably seen in every movie or tv show about psychology ever. But see, the thing is, Rorschach developed these tests as a tool to diagnose schizophrenia (because schizophrenics often have more creative and unusual interpretations of inkblots) and was extremely skeptical of the entire branch of psychology that appropriated his test. In 1939 (17 years after Rorschach died), the tests began circulation as a personality assessment tool. They were thought to be useful for clients to 'project' their inner thoughts, and for a skilled observer to interpret these 'projections'. The observer, or tester would sit slightly behind the client at a table. The tester would show the ten official inkbots (oddly specific, I know). Five of these are black, three are multicoloured and two are black and red (all very important, I'm sure). The tester allows the client to freely respond to all the cards, then asks them why they thought that. Everything said and done (down to rotation of the cards, and even permission requested to rotate said cards) gets written down and is used to interpret with some kind of scoring system (there are many, although the most popular is the American Exner) the underlying thoughts, motivations and thus personality. Unfortunately, despite the hype, the validity of the test is questionable (being a light way to term it). 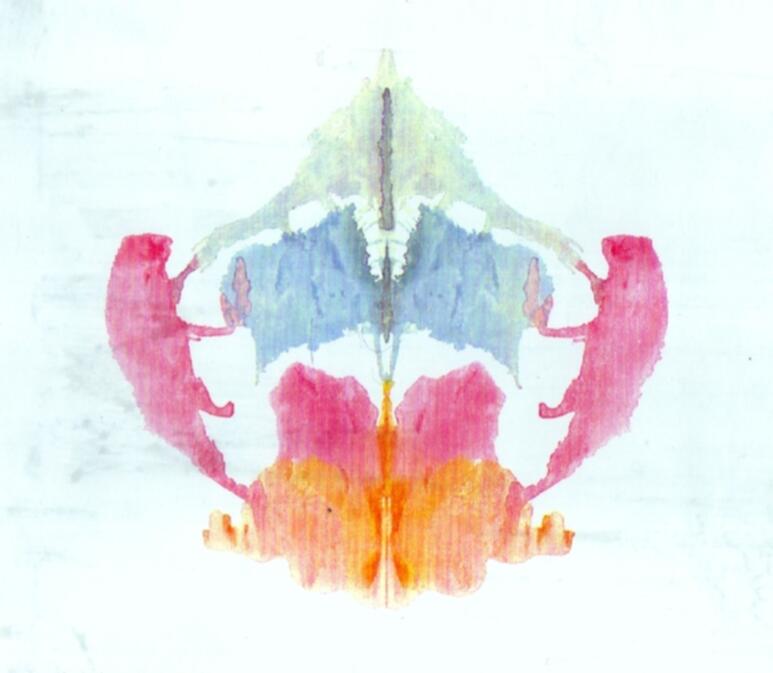 Those who find complex situations particularly stressful might find this Rorschach blot difficult to deal with. Or like almost every person who looks at it, you'll see a pink dog instead. "Rorschach blot 08" - Hermann Rorschach.

One of the methods for assessing whether a test is good or not is called inter-rater reliability. Basically, have two or more observers score something and hope they come up with something similar. In this case, the inter-rater reliability hovers around 50% (and that's generous - that score is for all projective tests, which, since others have more reliability, has probably rounded it up). You may as well ask a coin if it agrees with what the psychologist has come up with. This is problematic, because it's used a tonne. Especially in our prison systems. Predominantly in America, but in the UK and elsewhere as well. Now, fans of the inkblot test (let's not call it the Rorschach out of respect for the poor man) will tell us that it isn't reliable because it takes an extraordinarily long time to become a capable interpreter. The natural response is, of course, why bother? If it takes literal years to move past the learning stages of interpretation, and the result is a bunch of under-qualified interpreters picking up the slack, it might be time to focus on more reliable tests of personality. My advice? See an inkblot test? Look for someone new to talk to. Want to know who else is screwing you? Psychics and astrologists (or at least most of them), particularly for those of you who are really into the paranormal. Learn how to spot the fakers (hint: if the advice is super vague, they're probably just in it for the money). Or for another psychological theory that's been stretched way out of proportion, learn how the classic 'evolutionary' approach to sexual attraction (women want resources and men want to bang everyone) is, without doubt, not all there is to that story, here. Giving you the dirt on your search for understanding, psychological freedom and 'the good life' at The Dirt Psychology.